Today's blog post is an interview with published author Sandra Jensen who has several short stories published and is working on her novel.

Welcome to Life in Clarity Sandra, it's a pleasure to have you here. I've read a couple of your stories on the ether iPhone app and really enjoyed them. What genre would you say you write in?

If people ask I tend to say literary fiction. I have one or two short stories that are more 'commercial' in tone. But in truth this question usually stumps me and I've just gone to Google to see what other genres my work could fit into. Here was one definition of literary fiction: "Often the protagonist lives an emotionally intense (if rather unpleasant) life, based upon someone's actual experiences." I'd say that probably fits several of my stories! I don't try to write in a particular genre, however. I've written stories that could be defined as magical realism, I've written one unfinished and very bad science fiction novel. I mostly read literary fiction so I certainly am influenced in this direction.

And the novel you are working on, can you tell us a little bit about it?

The novel is set in Sri Lanka during the early 80s. There are two main protagonists: Helen a naive young woman from London who is unwittingly swept up in the turmoil of the country’s civil war; and Raghunath, a young man she is attracted to. Raghunath is imprisoned on suspicion of being a member of the LTTE, a Tamil Tiger. Essentially the story is about the consequences of thoughtless actions. It's about complicity: how we may not be the person directly responsible for horrific events, but if we stand by and do nothing as they unfold, what then? As per the definition above, the story is loosely based on an experience I had while travelling in Sri Lanka in 1984.

The novel sounds amazing Sandra and I for one will be picking it up on release. I wish you so much luck with it. Are you a full time writer or is it something you do along with another job and with this is mind, how do you write, routine, or an as and when writer?

I am a full time writer (which is not quite the same thing as making a living from writing, of course!). However I do find it difficult to keep to a routine, to write every day. I have to force myself sometimes. I run an on-line writing group, and I use this to motivate me. Last year I set an assignment for the group I called "a page a day" which basically meant just that: write one page a day, of whatever comes up. No plans, no ideals, just a page. No matter how awful the writing, for a month. When I'm not engaged in other writing I try to do this assignment, but even so I find it difficult, but when I do, it's an amazing practice, and has produced quite a lot of usable and publishable material for me, including my first competition win for a flash piece.

But, even when I'm not writing, I'm thinking about writing and I'm always engaged in the 'world' of writing in one way or another.

What are your writing aspirations?

I take it step by step. I would like to get my novel finished, and, of course, published. I also have a completed short story manuscript I'd like to get published, but I've been advised to hold off on sending this out until I have a novel accepted by an agent, at least. I have been contacted by three agents who read my short stories in literary magazines, and they are interested looking at a longer work. So, I need to get that novel finished! And then I presume another novel, and I have a couple of ideas for this, but I also like writing short stories and flash fiction. I will see when I get there! At the moment the novel I'm working on feels like an insurmountable mountain, even getting to a second draft would make me happy.

What does your work area look like and can we have a photograph?

I should send you a photograph I took recently for a newspaper that was looking for photographs on the theme "mess"! But instead I'll send you one of how it looks when it's tidy. I have a lovely view as I write: I look out onto a river which runs around the property. The wall behind my desk was painted by an artist friend. It's very quiet and isolated where we live, and this isn't actually working for me any more, so we are thinking of moving to a city, possibly London. 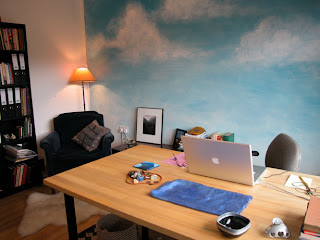 If you could sit down with someone living or dead and chat with them for an hour, who would it be and why?

Two people come to mind: my father, who died when I was seven. I wasn't close to him then, but I would like to know who he was, and to tell him how I'm doing. I think he'd be proud. He liked to write poetry. The other person is my childhood hero: Alexander the Great. He was my hero because of Mary Renault's novels about him, which I devoured over and over again when I was younger. Because of those novels I went on to study Greek and Classical Civilization at university, and perhaps they even influenced the fact that I'm a writer now. Something special happened for her with those particular stories, it seemed as if she almost channelled the time period, the characters. I would love to see how close to the 'truth' she was!

And finally, do you have any advice to anyone reading this who aspires to write but maybe hasn't taken that first step yet?

I aspired to write for most of my life. I always thought I'd 'grow up to be a writer', but growing up seemed to take a long time. What finally helped me - in my late 30's - to fully dive into writing was meeting a particular teacher, Barbara Turner-Vesselago, who teaches an approach called Freefall. I did a writing retreat with her, which more or less changed my life. It was her, and this approach, that 'turned on the creative writing tap' for me. I still go to her retreats, nearly every year. So I suppose I would say the best thing is to find support. If not a teacher or a mentor, a supportive writing group. I do feel most of us need lots of encouragement, it's such a lonely activity, one whereby you bare your soul over and over. Sometimes writing is very difficult, very painful, even if you've written for years, even if you've been well published. So the important word is 'supportive'. I know so many people who were told they couldn't write, and just gave up. It's so sad really. So keep looking for the people, and the environments that help you to write. Perhaps take a course, or do a retreat, or start a small informal writing group where you can share your work with each other.

And the other thing is to keep reminding yourself that it does take practise. Since we all 'write', I think it's easy to assume that we can therefore write fiction or memoir or poetry and so on, just like that. But it's a skill, no different to architecture or painting or playing a musical instrument. It takes time, support, and lots and lots of practise - even just one page a day will work miracles!

Start small. Don't think about a novel or a memoir or a book of short stories, don't even think of writing a whole short story. Just one sentence describing the colours outside your window is more than enough. And then, another day, write another sentence... write what your body feels, sees, hears. Word by word, sentence by sentence. Soon enough something will grow, will lead you into a larger piece or story, but let it happen when it wants to, don't force anything. It's important to sit at your desk (or wherever you'd like to write) and make the time to write, even if you don't actually do anything.

There is a lovely book by Brenda Euland I'd recommend to all aspiring writers - all writers actually - called "If You Want To Write, a book about art, independence and spirit". She talks about how inspiration works:

"Inspiration comes very slowly and quietly. Say that you want to write. Well, not much will come to you the first day. Perhaps nothing at all. You will sit before your typewriter or paper and look out of the window and begin to brush your hair absentmindedly for an hour or two. Never mind. That is all right. That is as it should be,--though you must sit before your typewriter just the same and know, in this dreamy time, that you are going to write, to tell something on paper, sooner or later. And you must also know that you are going to sit here tomorrow for a while, and the next day and so on, forever and ever."

Well, it seems I have a lot to say on this subject! Perhaps because I still struggle with it, every day. Each new blank page is like taking a first step, as if I'd never written anything before.

Thank you for taking the time to answer these questions. I know the life of a writer is about prioritising time so I appreciate it. It's been a pleasure to have you here. Thank you Sandra.

Posted by Rebecca Bradley at 12:07