In the spirit of Aprils A - Z blog challenge, todays post is titled Celestial for the angel legal system in author, India Drummonds book, Ordinary Angels which is released today.


Today's post is an interview with the lovely India Drummond

It's an honour to have you on Life in Clarity India. Thank you for agreeing to the interview.
Thanks so much for having me!


So as I've already mentioned Ordinary Angels is being released today. How are you feeling about that?
I’m excited, a little nervous, happy… just generally walking on air. It’s been a long road, but I feel like I’ve just arrived at the best part of the journey. In many ways, this is just the beginning.

What is Ordinary Angels about?
It’s an urban fantasy / paranormal romance novel in which Zoe Pendergraft falls in love with an angel, frees a soul from necromancers, releases a ghost trapped in the Void, and saves his living grandson from demons.

How did the idea come about?
Well, the idea of writing about angels came from a flippant remark my husband made once. We were having a sort of play-argument, in which he said, “I’m a perfect angel.” I replied with a derisive snort and told him that if he is what angels are like, we’re all in trouble. But it got those writerly wheels spinning, and the idea of “real” angels took root and grew from there.

Tell us about the path to publication
Oh gosh, it started back in university in my writing classes. I started sending short stories off for publication, and this was before I even owned a computer (no one had them at home back then—ages ago!) It’s been a long road with bumps and breaks, but each one of those obstacles taught me something important.

How long have you been writing prior to being accepted by a publisher?
I started writing stories when I was nine or ten. I actually remember (vaguely) that first story, and how empowering it was to be able to communicate my feelings in a different way. Now it’s more about craft and storytelling, but I still find it empowering.

When you're not writing, what genres do you like to read?
I really love mysteries and thrillers. There’s nothing like a good murder. But I also enjoy epic fantasy, science fiction—really anything with a good story.

Do you have a favourite book and if so what is it?
I don’t think I do. Every book I’ve read has taught me something, and I can’t say any one lesson or experience with a book has been better than another. Each one is different.

What does your workspace look like? (can we have a photo?!)
No way! My husband once took a picture of my computer space and compared it to his, mostly because he was so smug about his own tidy habits. Me, not so much. I know where everything is, but it’s not necessarily where anyone else would expect it to be. =)

If you weren't a writer what would your dream occupation be?
When I was young, I really wanted to be an archaeologist. But then again, that’s about stories too, isn’t it? I don’t think I could get away from storytelling in some fashion.

And finally if a film was made of your life, who would you like to play you and why?
I think I’d like it to be a highly fictionalised account where I got to be a kick ass secret agent. If that’s true, then let’s go for the whole fantasy life and have me played by Angelina Jolie. In real life, I’d probably get Roseanne Barr.

All that's left to say is thank you again, I wish you all the best with Ordinary Angels and I can't wait to read it!
Thank you so much for having me! It’s great to be here! 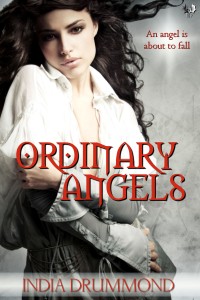