Today' blog post is an interview with fellow Ether author Mark Dark. I'd like to welcome Mark to Life in Clarity and thank him for taking the time out to answer my questions and for giving such a great interview. 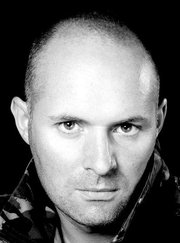 Where do you like to work and can we have a photo of your working space?
I live in Cambodia at the moment and here in Phnom Penh there are many ultra-cool cafes and coffee shops with free wi-fi- so that's where I like to work. I love the constant whirl of people and the buzz of life around me. If I sit at home alone I go crazy! If I really need to concentrate, say for a final polish, I tend to find a quiet corner. But anyway, when I'm really in deep with the story and the characters, the world could explode around me and I'd still be typing away. I seem to zone out. Plus, in cafes, there's a constant flow of pretty faces, colourful characters and caffeine on stream! 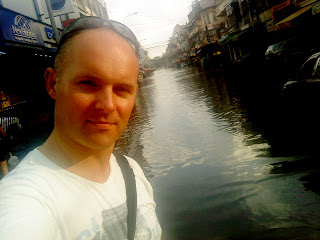 You very obviously have carved out your own style. When you're not working on a piece of writing, what genre do you like to sit down and read for fun?
For fun I like to read thrillers and literary fiction. I've just finished Chuck Hogan's The Prince of Thieves, which is the book the movie The Town was based on, but the book is very different. It's a story of a bank robber who falls in love with one of his victims. It's a really great story. The film was astounding, full of intricate sub-plots, layers upon layers of character complexities, intense suspense and plot twists, and the book has all that and more.
I've also been reading Lee Child and Mark Billingham. However, one of the most captivating thrillers I've read recently was Derailed by James Siegel. It’s brilliant film too. The story is awesome. The novel kicks ‘A’.
Another awesome book I've read recently is Vernon God Littleby DBC Pierre. It's written in 1st person as a 17 year old boy accused of a Columbine-style high school massacre in a small US town. Acerbic, caustic, hilarious. It was his first novel and totally deserved winning The Booker. The writer sees the world in brilliant and profound metaphor. It’s so original. If you want to read a master of metaphor at work and at the same time laugh your pants off, read this. The Booker judge compared his freedom with language - his ability to create new and dynamic idiomatic expression - with Shakespeare. What a writer to be compared to!
I just read The Life of Pi too, which shocked me. Phew! I just wasn't expecting it. The first 100 pages trundle along like an old train, slow and tedious really in its set up, but then suddenly the ship sinks, and the world becomes a vicious, brutal murderous fight for survival as the boy protagonist is stuck on a life boat in the middle of the Pacific Ocean with an orangutan, a zebra, a hyena and a tiger. And, put it this way,the animals are not friends! Really. I’d never ever read anything like this: rich, poetic, detailed, deeply disturbing prose describing things like a hyena eating a still-alive zebra from the inside out. *Shudder*.
I'm also reading Cambodia Year Zero about the atrocities of the Khmer Rouge in S21 or Tuol Sleng, a school that was turned into a prison, interrogation and torture chamber. One of my characters in Man or Mouse, Trippy, in the movie version,is obsessed with political dictators and has a diatribe at the disinterested Dogface comparing Hitler's genocide with Pol Pot's. Funny how our reading can sometimes regurgitate into our writing in the strangest possible ways!
Another book which inspired me recently was The Cellist of Sarajevo by Steven Galloway. So subtle, I actually thought I wasn't emotionally involved in the story of Arrow the young female sniper at all, until my tears wet the final pages. That's great writing.
If someone were to play you in a movie, who would you like it to be?
Well, since I trained as an actor I suppose it would have to be me! But if I wasn't available due to my hectic schedule, or if I demanded too much money, or if they refused to give me my own personal hairstylist, I suppose Brad Pitt would have to do ;)
All that's left to say is, thank you Mark. That was a great interview and I will be watching with interest the news on the film front!
You can find Mark at the following places – Blog
Facebook
Twitter
Ether books.
Posted by Rebecca Bradley at 18:26