Review - Girl 4 by Will Carver 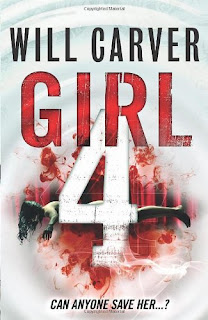 Detective Inspector January David has always put his professional before his private life, but the two worlds are about to clash horrifically as he visits his latest crime scene. He is confronted by a lifeless figure suspended ten feet above a theatre stage, blood pouring from her face into a coffin below. This gruesome execution is the work of an elusive serial killer.

Three women from three different London suburbs, each murdered with elaborate and chilling precision. And as January stares at the most beautiful corpse he’s ever seen, he detects the killer’s hallmark.

But Girl 4 is different: she is alive – barely. And January recognises her…

This book is written from the viewpoint of several people. Each person having their time to talk. Murder victims talk about what it was like for them before their death and Detective Inspector January David tells the story from his viewpoint, on the trail of a serial killer. This very serial killer even gets a voice.

The chapters are kept short to accommodate this style and it keeps things fairly fast paced.

It took me a few chapters to get used to the chopping and changing of viewpoints on such a regular basis, but once I had, I found I really enjoyed the different style I was reading.

The climax is lengthy and I couldn't put the book down for the last 100 pages. I'm not sure how I felt when it ended as it wasn't what I expected, but I will definitely buy another January David book.

If you're a crime reader and you want to try a different style, I'd recommend giving this a try and pushing past the first few chapters if you struggle with the style - though you could easily take to it straight away. It's a great read.

Posted by Rebecca Bradley at 05:30