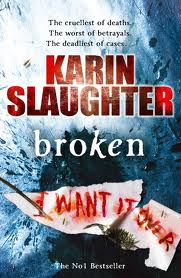 A woman's corpse is discovered in the waters of Lake Grant, and a note is found which seems to point to suicide – but Sara Linton has never been a woman to settle for obvious solutions. The principal suspect in the case has requested – desperately -- to be able to speak to Sara -- but when she turns up at his cell in the local police station, the suspect, Tommy Braham (whom she had known as a boy), is unable to speak to her. Tommy is dead; he has been savagely beaten, and his wrists have been cut. Scrawled in blood on the cell wall is a poignant message: ‘Not me’. Sara, personally involved now, is distrustful of Lena Adams the detective in charge, so she gets in touch with the Georgia Bureau of Investigation and asks (as she has done before) for the help of Special Agent Will Trent (Karin Slaughter readers will be well aware of the intriguing relationship between these two). The duo begins to suspect that a murderer enjoys the covert protection of the close-mouthed inhabitants of Grant County, who have fashioned a skein of non-communication. But, as the Bard observed, murder will out...


I've read the Karin Slaughter series since her debut with Blindsighted, which I loved and I've loved every day since. There are usually multiple gruesome murders to resolve and always something a bit iffy running around behind everything and I love this.

What I really love about Karins book are they are well written and character based as well as following the plot, the crime and all the procedural stuff but through the eyes of the very real people with very real flaws or ghosts that effect them. Its not just a matter of having a murder and watching the procedural stuff work through it, having characters with histories and failings you feel closer to them and in return to the book.

I loved this book and if you have read any of the previous in the series you will love this, but if this is your first Karin Slaughter, it may be a little confusing because past events are big drivers. I could see where newcomers may become a little disorientated. It's written so well, a new reader could go and read it, and enjoy it, but I love this author so much, I'm actually advocating you go and read the previous books in the series!

Great crime, great people and people you cared about or at least had an opinion about, what else do you need. Get yourselves into Karin Slaughter if you haven't already.

Posted by Rebecca Bradley at 20:48