Hospital Appointment and The Spoon Theory 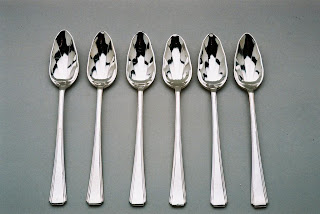 Last Thursday I had an appointment with a consultant rheumatologist. It was a good appointment in so far as she spent time with me, listened to me and explained things to me. She was only allotted 30 minutes for the appointment but I came out after about 45-50 minutes.

I'm a bit more defective than I thought I was but certainly not in comparison to some real bendies she has seen. It would seem I do have hypermobility in my larger joints (knees) where I didn't think I had. The slackness of my collagen has made my foot arches drop (again I hadn't realised) this has affected the angle of my knees and then my hips. My lower back is more curved than normal (again without studying multiple persons naked backs I was not aware my own curve was not the norm). My hips, as I did know, are very stretchy.

She was far from offended at my voicing my lack of faith in the NHS, which I think prompted the longer appointment.

I have been booked in for physio which I'm told will make me feel a lot worse before it starts to help and I'm not to expect it to help at any speed. My body has been failing me gradually for my whole life, it's not going to be fixed in a few weeks.

I'm also to be booked in for some relaxation sessions in an attempt to help my poor sleeping pattern.

For those people following me on twitter, you may well have seen me use the phrase "spoonie". This is in relation to an analogy created by Christine Miserandino to explain how it feels to live with any life debilitating illness. It is regularly used by people living with a variety of disorders as an open letter to family and friends in relation to how hard some days are.

Below is the spoon theory explaining just how bad some days can be - though for me, not all days.

The Spoon Theory
Posted by Rebecca Bradley at 10:15