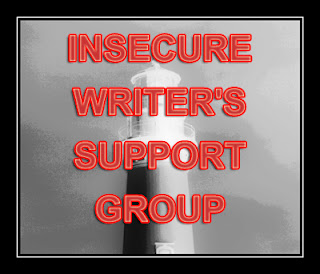 For the last few months I've read several blogs that have been a part of the Insecure Writers Group which was set up by Alex Cavanaugh. This group is a great idea. Once a month writers blog and share how things are with them, what is troubling them and anything else that falls within the category of insecurity and believe me, there is a lot of insecurity as a writer. It is such a generally lonely endeavour and this group goes some way to combat that, as does blogging and using other social networks, such as Twitter and Facebook. So, with it being such a great idea, I thought I'd sign up and join in the once monthly blog hop where we share the difficulties.

I signed up a few weeks ago and my blog is now on the extensive list of participants. The problem I faced when I came to write this post is that I became all insecure about sharing my insecurities. You see, my manuscript is still in submission stage and I'm chasing my dream of being traditionally published. Why should this matter when I'm posting about insecurities? Because nowadays agents and publishers are checking prospective authors social networking sites. It's no bad thing to show your human side, but, I am concerned that if I share too much about any insecurities and on a regular basis, it has the potential of being seen and interpreted in a way I wouldn't necessarily want it to be. So on that point, I think I have to bow out of the monthly blog hop, gracefully and say that my main insecurity right now is making sure my public profile is open, honest, but not too negative. A lot of writers won't agree with this, but unfortunately, it is my insecurity right now, so I hope this post can be taken as it was meant. An honest insecurity on wanting to join the published authors world. Alex if you read this, thank you for the opportunity and if it's not too much trouble, can you remove me from the list as it's obviously directing people to a blog that isn't participating.

To all insecure writers, keep writing, because if we keep putting bums on seats and not giving up, we can achieve our dreams.

Posted by Rebecca Bradley at 08:30