Blue Monday And On. 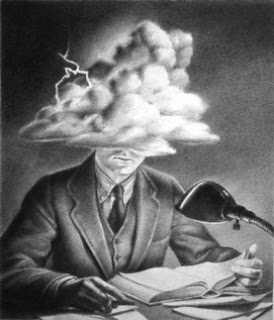 What is it about January and even February that leaves me with this feeling that I'm carrying around limbs and a head full of lead, or have heavy clouds floating comically around my head similar to the seeing stars effect, but especially made for January?

Blue Monday was named so by a publicity campaign which said the last Monday of January was the most depressing day of the year. Well I've been feeling Blue Monday for the majority of January and it's following me into February.

I announced on the first of January that was I was taking part in the 100,000 words in a 100 days challenge. That didn't happen. Yes I started and I have my first few chapters, I know where it's all going and the work has continued on in my head, but the ability to sit down at my desk and churn out the words is missing. I know we are supposed to make ourselves sit in that seat and work like any other job, but the way I'm feeling, the words wouldn't be anything like I see in my head and lead fingers would set in.

So, book two is happily running away in my head, that's still classed as working right? I'm also not just giving in to it and doing nothing. I have read more books in January than I have ever managed to read in a month. So again, I'm still working. You can't be a writer if you don't read. I'm loving the time to read and I'm loving losing myself in the books. I keep peeking up though to see if Blue January and February have gone yet, so I'm not hiding completely. I can see those heavy clouds around my head shifting now. Not much, but movement has started.

Do you feel affected by the seasons and if so, how do you combat it?
Posted by Rebecca Bradley at 08:30