Today's blog post is an interview with author and good friend, Mel Sherratt. Mel has recently seen her first released crime novel, Taunting The Dead, soar up the UK Amazon kindle charts and I'm thrilled to have her visit and chat about what she loves, and that's writing.

Hi Mel, thanks for visiting Life In Clarity, we are very honoured to have you here. As a writer aspiring to publication I'm very interested in how fellow writers get started and their processes. What started you on your path to writing?

Hi Rebecca and many thanks for hosting me on your blog. I'm not sure even I can remember the first step on the path because I've been on the journey for so long! It's a cliche but I've always wanted to write. From sixteen, I sent a few short stories to a magazine I can't remember the name of (I think it was Love Stories!) but they were all rejected, despite the encouraging comments that they were sending to me eventually. After that, I must have read every 'how to write' book in the library over and over but then life got in the way. My dream always remained but it became more of a hobby. You could always tell when I wasn't happy in a job or a relationship as I would turn to my writing to make me happy. Once things were on the straight and narrow again, I'd stop writing. Then a few years ago, I started to get serious about it, wrote 'Chapter One' and didn't finish until I wrote 'The End' three months later. Since then I've been trying to get better at it.

And how did your current crime fiction novel Taunting The Dead come into being?

Taunting the Dead was my agent's idea. I'd written three crime thriller novels, primarily with women characters - real women, real problems, real crime – but without publication success. She suggested I write a novel incorporating a murder whodunnit. Because I didn't have a police background, I came up with the idea of a family liaison officer being attracted to the main suspect in a murder investigation. But as the plots twisted and the characters became many, I realised that more scenes needed to happen outside of the family home. So the family liaison officer became a detective sergeant. I then researched and learnt about police procedures and Taunting the Dead grew to what it is today.

I'm imagining there's a lot that you need to know for a police procedural, how do you go about researching something like police procedure and forensics? 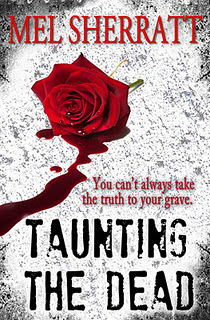 I never thought I'd be able to write a police procedural in all honesty. In fact, once I'd discussed it with my agent, I became blocked for a while convincing myself that I couldn't. 'Write what you know' is a common saying among writers but I suppose not many books would be written if we didn't break this rule! I researched a lot of things off the internet and brought a book on writing crime fiction. I also read tons of best selling crime fiction by authors such as Peter James, Mark Billingham, Lynda La Plante, who had characters similar to mine within their novels. I watched a lot of television programs but annoyingly I was soon shouting out 'they wouldn't just walk into a murder scene like that!' at the screen. I found a few contacts via twitter too. Some people are only too willing to help, if you ask nicely and respect their time. I also have a local bobby that I can chat through about the little things - obviously there is only a certain amount of information that I can be privy to. But the little things are so important to get right as I think these are the ingredients that make a book authentic.

I did think for a while that I became bogged down by research as a type of procrastination so finally I sat down and began to write. Gulp.

And in the knowing more, did you break any preconceived ideas of cops or just reinforce what you felt?

I don't think I had any preconceived ideas of cops as I used to work as a housing officer, so would often have dealings with them. The people I mixed with day in day out were true professionals. So you could say it reinforced what I already felt. And asking for information is great too. I would, however, love to have a look around one of the larger police stations in Stoke on Trent and get the feel and sense of the building - the smell of the cells, the noise in a busy reception on a Friday evening, that kind of thing.

You mentioned sitting down to write and the dreaded procrastination word. A word and concept I know many of us are familiar with. What is your ideal writing environment and can we see your work space please?

My ideal writing environment can be anywhere as long as I am alone and in silence - my dog, Dexter not included in that sentence! I find when I am drafting that I have to be silent. When I am editing, I can listen to music but it's only the radio rather than a particular music album. I know other writers that say the music helps them to write but for me it doesn't work. My ideal accompaniment is always coffee...

I have two places where I work, well, actually three if you count my settee! In the winter months, I hole myself up in my office, which is really the box room upstairs. It gets cozy in there when it's cold. But in summer, I sit at the kitchen table facing the garden. I had French doors fitted last year so now when the sun is shining, I can sit indoors with those open and it feels like I'm in the garden. Or when it's really lovely, I go out into the garden. Portable working at its best! 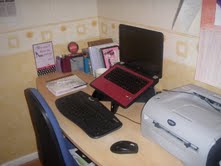 So, what's next for Mel Sherratt?

Gosh, I don't really know. Taunting the Dead is doing well so I'd really like to bring out the next book in the series - which I've only just started to think about. I have the title, characters, murders all mapped out so it's getting quite juicy. My ultimate dream is still to get a traditional deal so that's what I'm aiming for. I'd love to write this one as part of a two book deal.


Thank you for spending some time talking to me Mel. I know just how busy you are, so I appreciate the time. So, on the theme of interviews, the last question is - If you could interview anyone living or dead, who would it be?
I think it would have to be Elvis Presley. I grew up with parents who listened to his music all the time and their love for him rubbed off on me. I love listening to his songs and of course he would sing Wooden Heart just for me - in his GI uniform - swoon.

Places you can find Mel;


Taunting the Dead on Amazon

Posted by Rebecca Bradley at 08:30