On Friday evening I was fussing my much loved springer spaniel Bob, when I found a very pronounced lump under her ear. She has those floppy hang down and get in your dinner ears. 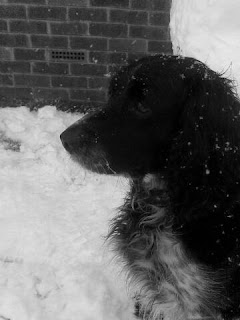 I was fussing her and rubbing her around her ears when I spotted it. Now it's not just a small pea size lump under her skin, and thinking about it, maybe those reading with weak stomachs might want to stop reading, whilst I go on to describe.

It's just by her ear canal hidden in the masses of fur she has round there but this protruded and was instantly noticeable due to its size, poking out the fur in this bald growth looking way. It's the size of a small plum. I washed and blow dried her two weeks ago so know it wasn't there then which goes on to worry me because of the speed of growth.

The visit to the vet was inconclusive, but pretty much as I expected. They can't tell what it is by looking at it, whether it's benign or malignant but what she could say is that it's not fatty and it's not fluid filled (as an infection) it is actually tissue. This doesn't fill me with much in the way hope.

She is now going to have it surgically removed and the lump tested. Whilst they have her sedated they're going to spay her. Won't she wake up a happy puppy!

I'm worried, but keeping the angst for, as and when I'm told I can start freaking. For now, my dog needs an op. She'll be home the same day. All is fine
Posted by Rebecca Bradley at 16:29