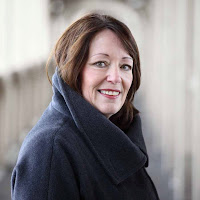 Last Year, at Harrogate Crime writing festival, I had the pleasure of meeting the very lovely and sweet, Mari Hannah and becoming friends with her. This year saw the release of her first UK novel, The Murder Wall, so I thought I'd invite her over and give her a slight grilling - erm, I mean, interview.


Welcome to the blog, it's so great to finally have you here.


The Murder Wall is your debut novel, recently released. I’ve read it, and loved it. I have reviewed it on Amazon, just prior to putting this post up, but it's not up yet. Amazon seem slow tonight, it should be soon though! Where did the inspiration for the book come from and what drove you to actually start writing it?

Hello! Thank you for inviting me to your blog.

There wasn't one single incident, experience or idea that inspired The Murder Wall. I wanted a theme that would show the personality of my protagonist, DCI Kate Daniels. I chose divided loyalties - a subject that has always fascinated me - because it places people in impossible situations. In this book, Kate's personal and professional lives collide. I pushed her to the limit and she came out fighting.

I began writing after a very serious wrist injury ended my career as a Probation Officer. Following surgery, I was unable to write with a pen and I began tapping away on a computer in order to get my right hand working again. I never stopped.

A probation officer! What a great job and I imagine, extremely helpful in understanding criminal offending behaviour and the investigation processes.

It was a great job. To be perfectly honest, it was always my second choice of career. What I really wanted to be was a police officer. But my kids were young and, as a single parent, I couldn’t cope with shifts. Now I am a police officer, but only in my head!

You’re right though, being a Northumbria Probation Officer did give me insight into criminal behaviour. I’ve always been interested in psychology and this was one of the subjects I studied as a Home Office sponsored student. I’ve worked with offenders – both inside and outside of prison – with sentences ranging from Absolute Discharge to Life. People offend for all sorts of reasons. Part of my role was to unpick these and put forward strategies for not falling into the same trap again. I do believe in rehabilitation. If I didn’t, I couldn’t have done the job. I think we all have the capacity to change. The question is: do we really want to?

Did you find yourself drawing from people you had come across to create the characters in The Murder Wall? If so, which character should we be looking at more closely?

No. Thankfully I’ve never worked with a serial killer. Or maybe I should qualify that, I don’t think I have. Every writer incorporates their experience into their work in some form or other but it would be totally inappropriate to base a fictional character on a real offender in order to entertain others. That is not to say there aren’t passages in my novels that don’t come close to the truth of my own experience working with serious offenders. For example, a sex offender once made a veiled threat to harm my children, a terrifying prospect for any mother to face. I used this experience – the way it made me feel – in book four (Monument to Murder) where a female professional faces a similar fate.

If not, do you have a set idea of the type of characters you want to set up together?
DCI Kate Daniels’ backstory is an important part of The Murder Wall. I wanted to create a situation where readers would see what she’s really made of. I thought of the worst thing that could happen to her and then I piled on the pressure to see how she’d react. I gave her an unsolved case she was desperate to solve, then another murder which also happened to be her first case as Senior Investigation Officer, her dream job after years of hard work. Then I threw a sinister killer into the mix. I’m very hard on her. So far, she hasn’t disappointed me.

How does your characterisation work?

To create a good drama whether on TV or in books you need conflict. You also need an antagonist to match your protagonist. They have to be equally committed to their cause. In The Murder Wall, the killer is on a mission and so is Kate. It’s a battle of wills which ramps up the tension as the story progresses. It keeps readers turning the pages.

You obviously know a lot about the subject matter you write about and you know what you want out of your story. One question that always hovers around in my mind, in relation to crime authors, is the background debate regarding crime authors and gender. Some people don't believe women can write good crime fiction, or not as good as the blokes anyway. I know my thoughts on that. If anything, what do you see as the difference between male and female crime writers?

I’d take issue with that – well I would do, wouldn't I? There are some fantastic and very successful female crime writers around. I could name names, but a glance at the bestsellers lists will prove my point. Obviously, men and women approach their work from different perspectives, but it’s the quality of their efforts that counts. ­I really don’t believe that gender comes into it at all. There’s a huge appetite for crime fiction out there. Writers across the board work very hard to satisfy demand. It’s all about engaging with readers. Whether you’re writing so-called ‘cosy’ crime or something much darker than that, it’s the ability to create interesting characters and tell a good story that is the measure of a good book.

It’s obvious a lot of work goes into your books. What does the writing routine look like for Mari Hannah?

I’m very disciplined. I have to be or the work just wouldn’t get done. I’m also a meticulous planner. When I have an idea for a new book, I write it down in a couple or three sentences. I then blow it up into a much longer document, anything between ten and twenty pages long. I work on that until I’m satisfied that I have all the story beats and plot points in the right order. After that, I search for visual references, make site visits, take photographs, that sort of thing. That may involve visiting the same place several times, day and night, before I feel I’ve nailed the setting enough to be able to write about it. You get so much more when you visit a place than if you sit at a computer and rely purely on the Internet. Setting is very important and it’s good to talk to local people.

The way I write sounds very prescriptive but it isn’t at all. It would scare me to death to write blind. Plans can change. Having an outline doesn’t mean there’s no room for manoeuvre. My outline acts like a road map: I may occasionally hit a diversion but, because I know the final destination, I can always find my way back. Barring any disasters, I write every day and I don’t stop until I have finished. I edit as I go, so when I reach the end the novel is of a high enough standard to show to my agent. Then I hold my breath . . .

When you’re not writing, what do you like to read to unwind?

I unwind by not reading in the evening if I can help it. I have a partner who spends a lot of time alone supporting me while I write. My evenings are reserved for her. That said, I’m sitting here now at 10:10pm typing away. Sometimes, it’s necessary to do that and she’s very understanding. Since I joined Twitter I’ve been guilty of opening up the iPad and joining friends for a chat, especially if I’ve not had a chance to catch up during the day. I do read in bed though most nights, usually until I fall asleep. Consequently, it takes me ages to finish a book. It’s mainly crime I read, a debut author if I can find one. I took Elizabeth Haynes’ Into the Darkest Corner on holiday and couldn’t put it down. 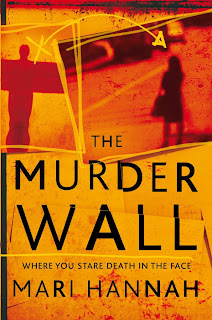 I know since the release of The Murder Wall, you’ve had a hectic schedule, so much so, you answered some of these questions from a beach when you were supposed to be on holiday! What does the next week hold for you?
On the evening of Thursday 14th June, I’m taking part in a Crime on Tour event at Newcastle Central Library organised by Theakstons Old Peculier Crime Writing Festival. This year they are celebrating their tenth anniversary by taking ‘New Blood’ out on the road to crime fiction fans, ahead of the festival itself which takes place in July in Harrogate. Danielle Ramsay and I will be interviewed by Ann Cleeves and I’m delighted to have been one of the authors chosen for this.

Thank you so much for taking the time to do this interview. It’s been great to have you here and I look forward to hearing all about Thursday.

Thanks for having me, Rebecca. It’s been a real pleasure. Good luck with your own writing. See you in Harrogate!

You can find Mari in any of the following places;

Amazon - Check out my review once it clears, it really is a great book and worth checking out!
Twitter
Website
Posted by Rebecca Bradley at 21:32