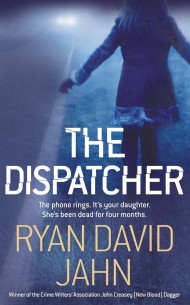 The Dispatcher by Ryan David Jahn.

The phone rings. It's your daughter. She's been dead for four months.

So begins East Texas police dispatcher Ian Hunt's fight to get his daughter back. The call is cut off by the man who snatched her from her bedroom seven years ago, and a basic description of the kidnapper is all Ian has to go on. What follows is a bullet-strewn cross-country chase from Texas to California along Interstate 10- a wild ride in a 1965 Mustang that passes through the outlaw territory of No Country for Old Men and is shot through with moments of macabre violence that call to mind the novels of Thomas Harris.

I loved this book! It has the feel of a spit on your boots, down and dirty, old American era. A feel I didn't really think I would be able to get in to, but one I found it impossible not to get dragged right down into the grit of.

With The Dispatcher you're taken on a journey with Ian Hunt, a man who pushes himself to the limit to find his little girl. A child he never truly believed was lost to him. Throughout, he never gives up hope and Hunt goes to extremes he never would have considered if his little girl hadn't have been at risk. I found myself questioning how far would I actually go to find my own child should she be in such a position. Jahn plays it so well, that you can't help but be dragged along with what is happening. If you want to really feel a story while you read, I would heartily suggest this book.

David Ryan Jahn will be at Theakstons Crime Writing Festival this year and I can't wait to pick up another of his books and get it signed. I will now be purchasing everything he releases. I'm a new and massive fan. This book is great buy and I highly recommend it.
Posted by Rebecca Bradley at 18:23