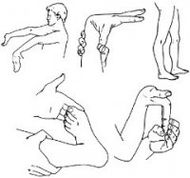 Wednesday 18th May 2011, 09.00 am. Waiting room in the genetics clinic with my little boy, specifically the Ehlers Danlos Syndrome diagnostic clinic. A date that I will always remember. It was early. There was one other person in the waiting area. It turned out he was a Doctor. Didn't seem to know where he was going, so I presumed he was a locum. Not ours though. Little man and I saw the specialist along with the genetic counsellor.
For the past year following a tentative diagnosis of EDS by little mans paediatric consultant I've been adamant that it also answered a lot of questions in relation to my own health issues as well as his.
Wednesday 18th May I had that confirmed. I was given the official diagnosis of Hypermobile Ehlers Danlos Syndrome and little man has inherited this from me.
Ironically enough, May is Ehlers Danlos awareness month, so I can tell you a little about this syndrome and what it means to my little man and I.
Ehlers Danlos is a connective tissue disorder where your body creates defective collagen.
Collagen is required for every part of your body, internally and externally. Depending on the defective part of the gene depends on the type of syndrome you have and how you will be effected.
For me, I have generalised hypermobilty. My joints stretch more than they should. Therefore in return, my joints hurt more than they should. My body generally hurts from trying to hold itself together. The two other main symptoms that I struggle with are; fatigue and migraines. Other than those three things, there are a multitude of things to cope with but they are bearable.
Between us we have been referred to three different hospitals for further tests and support. We have to have our hearts tested, we both have to see a rhuematologist and I have to have a tilt table test for symptoms that could suggest Postural orthostatic tachycardia syndrome.
It's a strange feeling having the diagnosis. It's one thing to think you have it, but another altogether to be told you definitely do have it. It's going to take some adjusting to but I know we can do it.
You will find further information on Ehlers Danlos syndrome on the UK Ehlers Danlos Support Group and the US Ehlers Danlos National Foundation
Posted by Rebecca Bradley at 14:29